WHAT’S ALL THE NOISE ABOUT?

The most American of holidays, the 4th of July is also known as Independence Day, and it commemorates the signing and adoption of the Declaration of Independence on July 4, 1776, which gave the colonies independence from Great Britain.

Many New Yorkers skip town for the 4th, but in our humble opinion, there’s no better place to spend America’s birthday than right here in the Big Apple. If you’re planning to be in town, here’s our handy-dandy guide to everything you need to know to ignite a truly spectacular celebration.

The current forecast for the 4th predicts some clouds in the morning giving way to mainly sunny skies for the afternoon. Humid, with a high of 87, a low of 72 and a mostly clear night to watch the fireworks. Not too shabby!

The famous Macy’s 4th of July Fireworks will be lighting up the night sky as always, and this year’s show will be over the Hudson River.

This is the 37th annual Macy’s fireworks, and the theme this year is “It Begins With A Spark.” A soundtrack has been created by Usher, and the music can be heard on 1010 WINS. The night’s line-up will include performances by Mariah Carey, Tim McGraw and Nick Cannon.

The show starts at approximately 9:00 pm, and you can view these “bombs bursting in air” from any area with an unobstructed view of the sky above the river. For the best views, head to 12th Avenue below West 59th Street at the following access points along 11th Avenue:

If you’re not in the area, NBC will broadcast the fireworks live. For more information, you can call the Macy’s Fireworks Hotline at 212-494-4495.

Nathan’s Famous Hot Dog Eating Contest will take place as always on Coney Island, with the top male and female finishers from qualifying rounds competing to see who will be top dog. An estimated 40,000 fans are expected to make the pilgrimage to the corner of Surf and Stillwell Avenues in Coney Island to relish this event up close. Join them if you can stomach it, or watch the live ESPN telecast at 1PM. Best of all, Nathan’s Famous will make a donation of 100,000 hot dogs to one of our favorite charities, the Food Bank for New York City. YOU SAY YOU WANT A REVOLUTION…

Patriots and history buffs can party like it’s 1776 by embarking on “Revolutionary New York – Celebrate Independence Day” — an historical journey brought to you by the folks at Big Onion Walking Tours. You’ll march through Lower Manhattan visiting sites associated with our nation’s War of Independence and New York’s role in the early Republic. Stops include the site where the Declaration of Independence was first read to a New York audience, as well as Federal Hall — the place where George Washington delivered his Inaugural Address. The two-hour tour starts at 2PM and costs $20 or $15 for students and seniors. For more information, call 888-606-WALK or visit www.BigOnionTour.com. 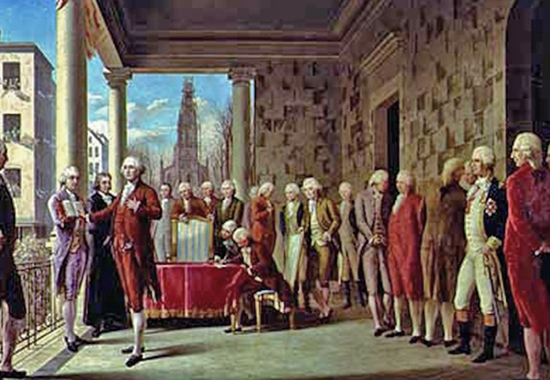 Musical events abound this July 4th, so take your pick of whatever kind blows your horn. Here are a few of our faves: YOU CAN GET THERE FROM HERE:

If you’re planning on driving in the city, be aware of holiday street closures by visiting the DOT’s Weekly Street Closure page here.

As for subways, all trains and buses will run on a Saturday schedule. Visit the MTA website for more information.

If you’re coming in from New Jersey, one great option is Edison ParkFast’s Park & Ride at Secaucus junction. You can park your car just steps away from the Frank R. Lautenberg Rail Station, hop on a train and arrive at New York’s Penn Station in just 13 minutes. Or, if you’re coming from North of the city, the Edison ParkFast Park & Ride in Inwood, just a few feet from the A-train, is a terrific way to avoid holiday traffic. Call 888-PARKFAST for more information, or visit ParkFast.com.

The best way to enjoy the 4th in NYC is do so without hurting yourself or anybody else. ALL consumer fireworks are banned in New York State, except for those who have a permit. That said, we know there are those of you who just can’t resist lighting off a bottle rock or two. If you’re planning on being one of these law-breakers, here are a few good rules to remember:

But again, the best way to handle fireworks is not to handle them at all!

On behalf of everyone at Edison Offices NYC, we wish you all a safe, happy, fun-filled 4th! And happy birthday, America!